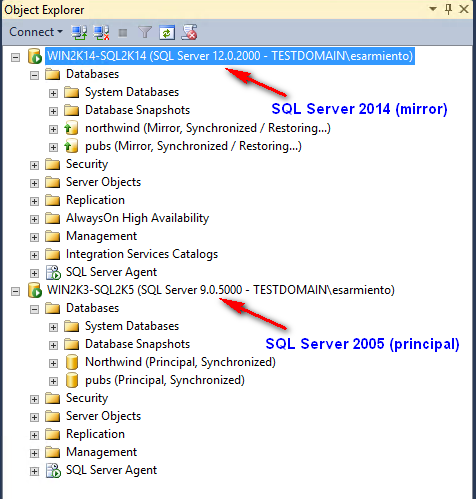 It is a reality for a lot of customers – they still have SQL Server 2005 in their environments. It is only now that they are planning for upgrading their databases to the latest version of SQL Server. In a previous blog post, I talked about how to integrate Microsoft Product Lifecycle and Support Policies into IT Operations which concluded with planning upgrades and migration based on the version of SQL Server that you are running.

As I mentioned in a previous blog post, one of the main considerations in upgrading to the latest version of SQL Server is high availability. If the database is considered mission-critical, careful planning should be undertaken to minimize downtime during the upgrade process. There are two main strategies for upgrading: in-place or side-by-side. An in-place upgrade is where you directly replace an older version of SQL Server with a newer version on the same machine and the same instance. A side-by-side upgrade (which I also consider as a migration in some aspects) is where you create a new instance of the target version of SQL Server and copy all of the databases, objects, logins, etc. from the source to the new target. I’m a big fan of side-by-side upgrades because I can perform all of the tasks necessary prior to the upgrade without affecting my existing production workload. This means I can do application testing, performance and workload baseline, and potentially automate the whole process of upgrading/migration to reduce downtime as much as I can.

There are two options that I mainly use when doing side-by-side upgrades for SQL Server databases – log shipping and database mirroring.  If I’m running SQL Server 2005 and higher, I’m more inclined to use database mirroring due to the nature of the synchronization process between the source and the target. Database mirroring gives me the option to reduce the potential downtime as much as I can. In both cases, I can do a what is known as a rolling upgrade – a process by which you upgrade the standby (be it a secondary database in a log shipping configuration or the mirror database in a database mirroring configuration) and migrate/upgrade the databases by failing them over to the upgraded version. What I really like about doing so is it gives me the opportunity to upgrade not just the SQL Server database but the underlying server operating system as well, especially for standalone SQL Server instances. This is a great time to move away from those old 32-bit systems towards 64-bit versions. For example, if I have a SQL Server 2005 instance running on Windows Server 2003, you can create a standby standalone instance running SQL Server 2017 64-bit on top of a Windows Server 2016 64-bit machine. You can then configure either database mirroring or log shipping between the two SQL Server instances, using the older version as the primary and the newer version as the standby.

One piece of advice. If you intend to use database mirroring to perform a side-by-side upgrade, be very careful to break the replication between the two if you will be performing testing prior to the production cutover. This is because the upgrade is a one-way street – once you failover to the newer version using database mirroring, the database version will be upgraded in the process. Once that’s done you can no longer go back to the older version apart from extracting the data and schema from the upgraded version and recreating it back on the old version.

Let me know how you’re planning for your SQL Server upgrades and migration. Maybe I can help out.