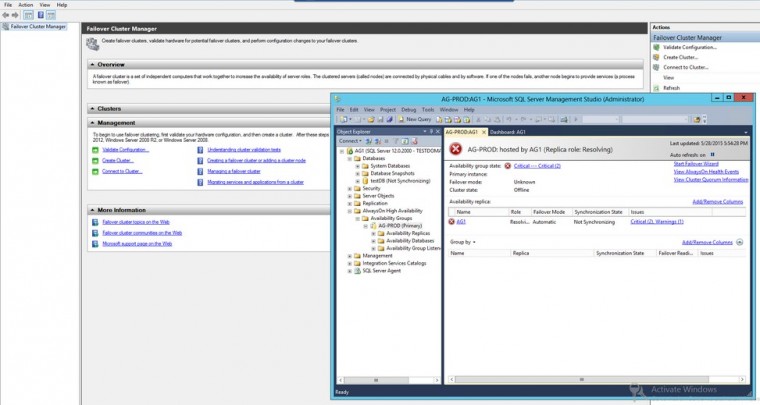 This is a question that I regularly ask those attending my high availability and disaster recovery presentations: is your SQL Server Always On Availability Group really highly available?

It’s easy to fall into the belief that something works until it doesn’t. And, then we blame someone – either the vendor or the one who implemented the solution – when it doesn’t. That’s why we need to understand the underlying infrastructure and it’s behavior.

Since SQL Server Always On Availability Groups (AGs) (as well as failover clustered instances (FCIs)) depend so much on the underlying Windows Server Failover Cluster (WSFC) for health detection, automatic failover, etc., we need to understand how WSFC works and how it actually keeps the applications running on top of it online.

As per this TechNet article, the quorum for a cluster is determined by the number of voting elements that must be part of active cluster membership for that cluster to start properly or continue running. This means that the number of voting members in a WSFC determine whether or not the cluster stays online together with the applications running on top of it. You’ll commonly see a 2-node WSFC – both for AG and FCI – because of simplicity and ease of management. A disk witness (commonly known in the past as a disk quorum) is typically used for an FCI while a file share witness for AGs with standalone instances as replicas.

Every node in the cluster, by default, will have a vote. In order to keep the cluster up and running, the total number of votes have to reach a majority. The calculation for majority of votes is as follows:

I mentioned voting members because there are a dozen or more combinations of configuration that you can implement where the voting members may or may not have a vote, depending on your requirement. This could mean having a node that does not have a vote if you’re on earlier versions of Windows Server. But, first, let’s start with the common 2-node cluster and how quorum behaves on different versions of Windows Server.

In a 2-node cluster, the majority of votes will be one (1.) And because both nodes in a cluster will have a vote, by default, we don’t really have a majority since 50% is sitting right in the middle. This is the reason why an additional vote in the form of a disk or file share witness is introduced. We need a “tie-breaker” in order to have majority of votes. Now that we have three (3) votes – two from the cluster nodes and one from the witness – the majority of votes will be two (2) – three divided by two is 1.5, plus one is 2.5 (I’ve never really gotten the hang of doing math using words in a sentence.) We need to round down the results of the calculation of votes since we cannot really have half-a-vote. 66.67% is definitely higher than 50%, making it a majority. You can use this same logic to calculate the majority of votes for any number of nodes in your WSFC to keep it online and available.

So, Is My Always On Availability Group Really Highly Available?

Since our goal is to keep the WSFC online, we have to make sure that majority (if not all) of the voting members remain online and available. Just because a voting member is online doesn’t mean it is available from the WSFC’s point of view. It could mean that the network switch that connects one of the nodes to the WSFC become unavailable, causing it to be disconnected and not communicate with the other nodes. The node is online but it isn’t available as far as the WSFC is concerned.

So, with Windows Server 2012 (same as with Windows Server 2008/R2,) when I lost the file share witness, I still have two out of three votes (majority of votes) that kept the WSFC online. When somebody rebooted the secondary replica because of the installed security patches, the WSFC only had one out of three votes which is less than majority of votes. Doing so took the WSFC offline which also took the Always On Availability Group offline. Below is a screenshot of an SQL Server 2014 AG configuration that runs on Windows Server 2012 where the network connectivity between the nodes in the WSFC became unavailable. The customer panicked and complained when that happened. For one, they expected the AG to stay online regardless. Unfortunately, they were not monitoring the file share witness and, while it remained offline, somebody rebooted the secondary replica. This would not have happened if the file share witness remained online while the secondary replica was rebooted.

The good thing is that they were on Windows Server 2012. This version of Windows Server introduced the concept of dynamic quorum and is enabled, by default.  The WSFC manages the vote assignments to the nodes depending on their state. If the node is taken offline – rebooted, powered down, disconnected from the network, etc. – it’s vote is also removed from the cluster. It’s the reason why the AG went offline when the cluster node was rebooted. The beauty of this is that, when the node came back online, the cluster went back online (together with the AG) by virtue of the vote being added back to the WSFC. This was worse in earlier versions of Windows Server in that, if the WSFC went offline, the only way to bring it back online was to force start without quorum. Unfortunately, even when the WSFC came back online eventually, the SharePoint farm still was taken offline and was down for almost half an hour because it took a while to reboot the server.

Windows Server 2012 R2 introduced the dynamic witness feature. From the name itself, the WSFC dynamically adjusts the voting capability of the witness resource based on the number of votes required to meet quorum. This works in tandem with the dynamic quorum feature in Windows Server 2012 to enable the WSFC to maintain availability when any of the voting members become unavailable which also eliminates the additional administrative overhead of having to keep an odd number of votes.

Know Where You Stand

With AGs dependency on WSFC, there’s a lot that we DBAs need to be aware of that go outside the scope of their traditional job description. We need to know about Active Directory, DNS, networking, WSFC and AGs just to keep our databases highly available. So, in order to really know if your AGs are highly available,

There really is no guarantee that your AGs will always be highly available all of the time. That’s why it’s important to define your recovery objectives and service level agreements. But knowing where you stand and how you can resolve issues when they occur can help you meet your availability goals.

6 comments on “So, You Think Your SQL Server Always On Availability Group Is Really Highly Available?”